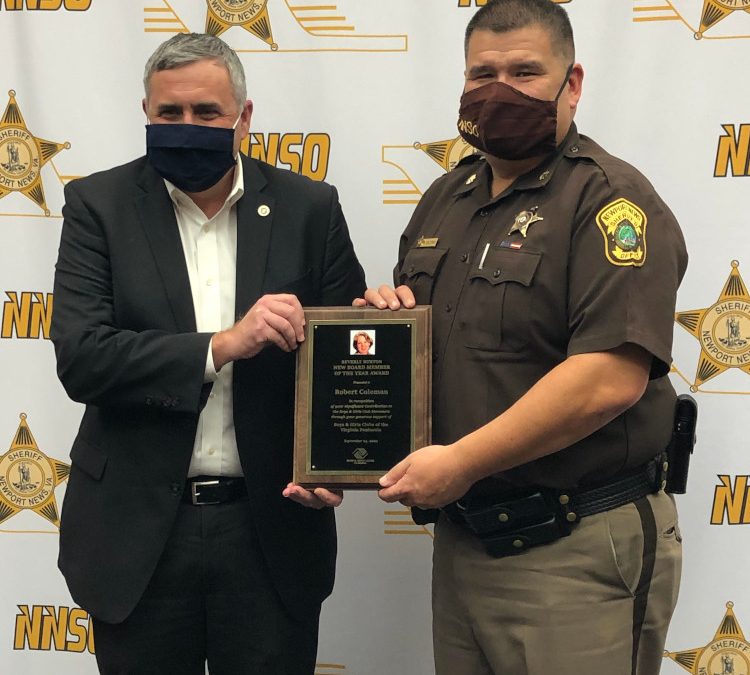 The “Beverly Burton New Board Member of the Year” award is given to a Board member with less than three years of service on a local governing body. Beverly M. Burton began volunteering for the Boys & Girls Clubs of America in 1982. She served for nearly 25 years and received numerous awards. After her passing in 2006, BGCA re-named the New Board member of the year award in her memory.

Hal Smith, President and CEO of BGCVP noted, “The Virginia Alliance of the Boys & Girls Clubs represents 19 Boys & Girls Clubs organizations throughout the state and is comprised of more than 100 individual clubs. We are thrilled that Rob was chosen as new board member of the year as he is most deserving. From advocating for our members at both the state and national level, to engaging one-on-one with our kids, and acting as a liaison to the Newport News Sheriff’s Office, Rob’s leadership skills have been a tremendous asset to our organization. We are extremely grateful for his commitment not only to our kids but to our movement.”

Major Coleman has been a member of the Newport News Sheriff’s Office for the past 24 years.
Rob made his way through the ranks from corrections deputy to his current position of Major, Operations Bureau Chief for the Newport News Sheriff’s Office. He is responsible for the safety and security of approximately 500 inmates and over 100 sworn and civilian staff members. Rob also oversees Corrections, Work Release, Armory/Firearms Training, Intake & Records, Medical, and Building Services. Rob is a graduate of the National Criminal Justice Command College at UVA, Hampton Roads Regional Criminal Justice Academy, and The Leadership Institute of The College of William & Mary and HRCJA.

About Boys & Girls Clubs of the Virginia Peninsula

Boys & Girls Clubs of the Virginia Peninsula has been a leader in youth development since 1946 with the mission “to inspire and enable all young people, especially those who need us most, to reach their full potential as productive, caring, and responsible citizens.” The organization currently serves almost 5,000 youth each year in 12 clubs located in the cities of Hampton and Newport News, and the counties of Gloucester, Mathews, and York. Youth benefit from caring professional staff who help them take control of their lives, envision productive futures, and set and achieve goals.  Boys & Girls Clubs offers youth a safe place to learn and grow with programs in five core areas: Education & Careers, Leadership & Service, Health & Wellness, the Arts, and Sports & Recreation. For more information, visit our website, or follow us on Facebook and Instagram.

About the Virginia Alliance of the Boys & Girls Clubs