‘She wanted you all to play,’ police chief says to basketball team of slain officer 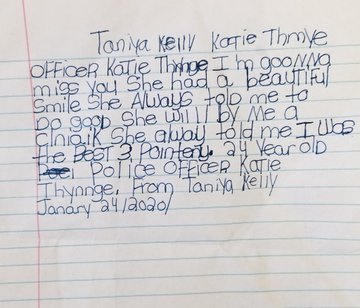 WAVY – January 25, 2020 – NEWPORT NEWS, VA – Officer Katie Thyne didn’t just stick to policing the streets, she also took her skills to the basketball court every weekend as a coach in the Chief’s Challenge Youth Basketball League.

For the last year and a half, Saturdays at the gym inside the Boys and Girls Club at 629 Hampton Avenue in Newport News meant three-on-three basketball games played by teens from the community and coached by Newport News police officers.

“It teaches them that it’s not just about ‘we have a badge and gun we are bad’,” said Monique Davis. “It’s more less, ‘we are your friends we are here to serve and protect you’.”

Davis, 37, of New York City moved to Newport News back in August with her kids and almost instantly got her son involved in the basketball league. She says when she found out about Officer Thyne’s untimely death, she knew it would hit the community hard.

“It’s going to hurt her team, it’s going hurt everybody,” Davis said. “She is very nice, she always kept a smile on her face. She’s very easy to talk to, she is an outgoing person.”

Officer Thyne, 24, died Thursday night after she was dragged by a suspect vehicle and then pinned between a tree and the vehicle.

At the entrance to the club a card with Thyne’s picture was being signed by kids in the community, while all basketball players wore a sticker of a police badge with a black bandage over it.

Davis made a shirt with Thyne’s picture and badge number on it, and presented it to an emotional Police Chief Steve Drew before the game.

Drew recalled that originally, there was talk of canceling the games after Thyne’s death. But he quickly knew he had to reconsider.

“She wanted,” Drew said, pausing to fight back tears, “she wanted you all to play.”

Before a moment of silence was held, Hal Smith, CEO of the Boys and Girls Club of the Virginia Peninsula, told the students to think of her as they play.