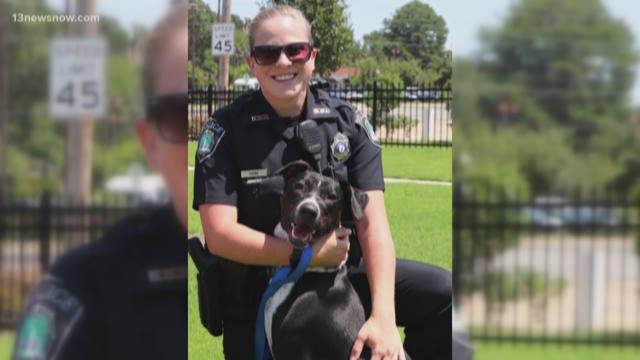 WVEC – January 25, 2020 – NEWPORT NEWS, Va. — The game must go on, but players at the Boys and Girls Club of the Virginia Peninsula are playing with heavy hearts.

Saturday’s game is about more than basketball, it’s about remembering a dedicated mentor, volunteer, and coach.

Officer Katie Thyne, 24, died in the line of duty on Thursday night.

President and CEO of the Boys And Girls of the Virginia Peninsula, Hal Smith said Thyne was a coach for a girls basketball team.

“Today let’s have a moment of silence to honor Katie,” Smith said to a room full of parents, police officers, and players.

“She has spent countless hours, days, and weeks in our club.”

Thyne died after a car dragged her about a block before it crashed into a tree and pinned her. The car had been pulled over in a traffic stop.

“She’s doing her job and she loses her life and it’s not fair,” parent Monique Davis said.  “It’s tragic that she had to lose her life over a traffic stop. Doesn’t make any sense.”

Thyne’s friends and colleagues came out for the game. Police chief Steve Drew, still hurting from the loss, said Thyne would have wanted today’s game to continue.

“She wanted you all to play,” he said. “So play hard, have fun, keep her alive in your hearts and minds.”

Those who knew her say she may be gone, but her impact is lasting; And the memories they have of her are something they’ll take with them, forever.

“She’s really become part of our family,” Smith said. “The memories and the impact that she had—especially in the lives of the girls she coached on the three-on-three team—they’ll be able to take that with them for the rest of their lives. Those memories will not die; They’ll carry that on, forever.”