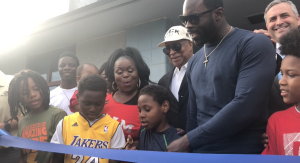 NEWPORT NEWS, Va. – Back at his old stomping grounds, Michael Vick took part in the unveiling of a newly renovated Teen Center at the Boys & Girls Club of the Peninsula.

Michael Vick cuts the ribbon on the new Teen Center.

Vick grew up playing in the same facility, and donated new TV’s, Xbox’s, and board games for the teens to use. “I mean I grew up here,” Vick said. “We want the kids to feel good about where they’re at, and be excited to come here. It’s all important, we just have to continue to be visionaries for them and make it happen.”

“We understand what its like to be in the shoes of young kids that visit this Boys & Girls Club.” Vick, who is now a Fox Sports Studio Analyst, says this is just the beginning of what he plans to do with the club.

“This club won’t look the same in a year.”