When home internet access is too expensive, low-income residents turn to other resources 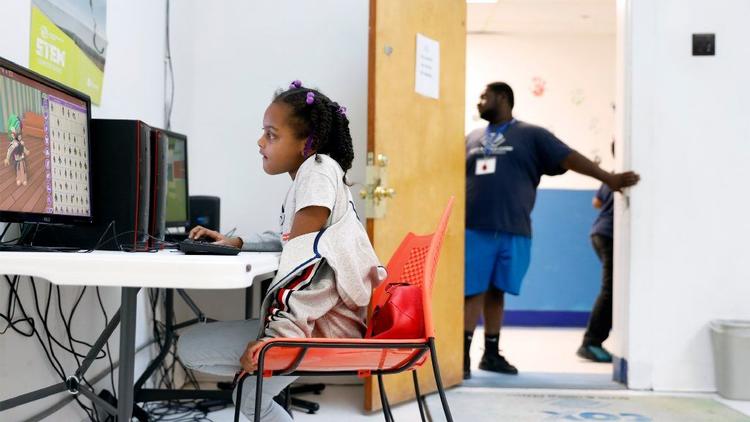 Davion O’Neal ran up the street, two of his friends close behind. Out of nowhere, a blue car jumped the curb and screeched to a stop in front of him.

Pressing the space bar, he hopped onto the roof of the car.

O’Neal and his friends are playing a game on Roblox, a multiplayer online gaming platform based in a world built of Lego-like blocks. It’s one of the games they’re encouraged to play in the computer lab at the Citizens Boys and Girls Club on Shell Road in Hampton to promote teamwork and good communication skills.

He couldn’t do this at home — his family doesn’t have internet.

It’s not an uncommon story. About 57 percent of Newport News and 74 percent of Hampton households had broadband in 2017, according to the Census Bureau.

Joseph Belk, 8, was playing another game on a Chromebook laptop provided by the club. He does have internet at home, but he has to share a computer with the rest of his family.

“My sister gets it on Sunday, my brother gets it on Monday and I get it on Saturday,” Belk said. “The rest of the week my mom has to use it.”

According to survey data collected by the U.S. Census Bureau, about 40 percent of the households near the Boys and Girls Club unit didn’t have a subscription to an internet service between 2013 and 2017.

About 18 percent of households in that census tract, bounded by Shell Road and Pembroke Avenue, didn’t have a computer.

It’s just a matter of providing the service at a cheaper price. A lot of people don’t have service because it’s just too expensive …— Sheila McAllister, Newport News director of planning

“You do have a lot of them who are, you know, not as fortunate. So, computers, laptops, things like that aren’t common in their household,” unit director Keisha Waller said.

She said she regularly sees the benefits of giving students the opportunity to play online in teams, not just for homework for research, like they had been doing earlier in the day about historic African-American figures.

“It causes them to interact positively, too,” Waller said. “The computer brings them together as a whole.”

That first part of Newport News had a median annual income of about $25,000 during that time period, compared to about $51,000 for the city as a whole. Near Richneck, the median income was about $77,500.

Internet providers have infrastructure across the area, according to Newport News director of planning Sheila McAllister.

“It’s just a matter of providing the service at a cheaper price,” McAllister said. “A lot of people don’t have service because it’s just too expensive for them to have.”

When broadband is too expensive

Cox Communications offers a low-cost plan that provides broadband and a free Wi-Fi modem for $9.95 a month to households participating in certain benefits programs with a school-aged child.

“They can’t get the $9 special because they owe a past bill, so therefore they don’t have internet,” Sample-Jones said.

Other residents might rely on cellphones. About 6 percent of Hampton and 8 percent of Newport News households used only cell data plans for internet access in 2017.

There are a few places southeast Newport News residents can find free Wi-Fi, such as the McDonald’s on Jefferson Avenue.

Community resources include computer labs at Ridley Place’s Family Investment Center and the Pearl Bailey Public Library on Wickham Avenue, although both have limited hours.

For children who are members, Boys and Girls clubs also can provide an opportunity to get online. At the Citizen’s unit, Wi-Fi, internet safety classes and printers are available.

Kids could go to a library, Waller said, but they need parental assistance to get a library card.

“If you already have a parent who’s not very active in your life, it’s hard to get them to,” she said.

Hundreds of students in Newport News and Hampton have gained internet access in the last couple of years thanks to schools and cellphone provider Sprint.

The district issued about 640 devices last year, according to Brandie Wright, who coordinates the program for the district. So far this year, it has issued about 200.

“To be honest, I think we were actually pleasantly surprised that it wasn’t as many students that didn’t have internet access, based on our demographics,” Wright said. “However, we know that the population is still there and it’s very distinct for our school district.”

I think we were actually pleasantly surprised that it wasn’t as many students that didn’t have internet access, based on our demographics.— Brandie Wright, who coordinates device program for Newport News Public Schools

Most students in the program, according to Wright, didn’t have a device of their own to use for homework.

Now students who can’t make it to school or are suspended can complete some school work. Wright said students also use hotspots and tablets to finish graduation requirements through online classes if they didn’t graduate on time in May.

“I’ve seen (teachers reaching out) more this year than last year, which is good because that has told me that the word has gotten around that we have this program available,” Wright said.

The hotspots compliment other device programs, according to Maxlow.

In Hampton, all students from fifth grade up get Google Chromebook laptops. Three Newport News high schools provide those to students.

“There’s just a lot more engaging instructional experiences they can provide while at home,” Maxlow said. “We have cases where students are checking their Google classrooms and interacting with teachers each evening through this program.”

“If you are in the digital divide — where you don’t have access to technology or you don’t have the skills to be able to use a computer to access those government forms or get your prescriptions filled or fill out that online job application — it makes it extremely hard for you to just get ahead,” Alcantara-Antoine said.

The program will start with the Bailey library, likely within the next year, and expand if it proves successful, Alcantara-Antoine said.

That library serves some of the communities where broadband is the scarcest, including the Marshall Courts and Ridley Place public housing communities.

About 64 percent of Ridley Place households don’t have access to a computer with internet at home, according to a city assessment.

Newport News is one of four 2018 finalists for federal Choice Neighborhoods Initiative grants of up to $30 million to revitalize the Marshall-Ridley area.

McAllister said the city started a broadband study in conjunction with a consultant in southeast Newport News in August. Her office is in the process of reviewing the results.

Internet access proposals floated as part of the grant include increasing the number of computer labs in the area and creating a network of Wi-Fi hotspots, possibly using existing utilities such as light poles.

Sample-Jones, who is serving as a community liaison in the CNI grant process, hopes that the city can use its young people to help implement the initiative. The city will find out in March if it won the grant.

“If they’re helping their elderly neighbor around the corner get internet access, and this is their job or they’re getting their community service hours for school, it seems like it would work,” Sample-Jones said. “It’s a great idea.

“Then our internet would be affordable.”

The original article is located on The Daily Press website.