Once a pipedream in his eyes, Allen Iverson donates a new basketball court to his old Boys & Girls Club 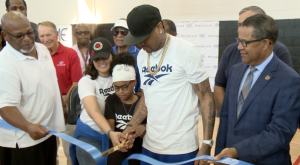 NEWPORT NEWS, Va. – The list of milestone moments for Allen Iverson is longer than an NBA court. 94 feet isn’t enough space to talk about the impact the Hampton native left on the game of basketball.

Iverson’s most recent feat is one he is just as proud of as winning an NBA MVP award — remodeling the same basketball court he grew up playing on.

“It’s just a great feeling, I don’t have any words for it,” Iverson told News 3.

Friday at the Greater Hampton Roads Boys & Girls Club in Newport News, ‘The Answer’ and his family cut the ribbon on a brand new basketball court. It’s something that he didn’t envision happening when he was a youngster playing on that court.

“Not at all in my wildest dreams,” Iverson said. “My whole thing was, everything I accomplished in the NBA was a bonus. I just wanted to make it and step foot on the court.”

Iverson did that, and became a four-time scoring champion in his fourteen NBA seasons. The Naismith Basketball Hall of Famer has inspired a generation of youth that barely got to see him play in his prime.

“Youtube,” Iverson jokingly said. “It’s the same thing I had to do with my son. I had to put him on to Michael Jordan, to let him know that all these dudes out here can play, but this is Black Jesus right here.”