Taking Back the Community: Passport to Manhood 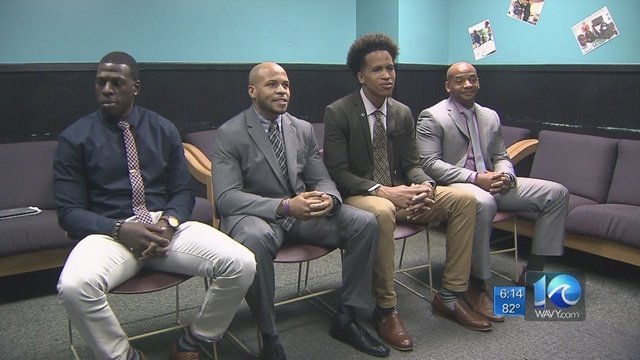 NEWPORT NEWS, Va. (WAVY) — Being a man takes time and commitment. A group of role models started a program in Newport News to get teenagers off the street and into a place where they can accomplish their goals.

There are so many teenagers in our community who have seen a lot — perhaps too much — in such a short time. From being locked up, to being shot, to being the man of the household at 16 years old — This is the story of shaping our youth to be the best versions of themselves. And it’s a thank you to four men who are making a drastic difference.

The program is called “Passport to Manhood.”

Four mentors meet with boys at the Boys and Girls Club of the Virginia Peninsula. It’s about inspiring boys to understand and embrace what it takes to grow into productive, caring and responsible men.

Cameron Bertrand, area director of the Boys and Girls Club, said, “The streets out here in Newport News right now — A lot of violence, a lot of crime and I see I have a direct impact on that. I’m able to go a lot of places that a lot of people aren’t.”

The majority of the men in this program don’t have a father figure in their life. In fact, most of these teenagers are the oldest males in their households.

“My dad lives about 100 feet from this Boys and Girls Club. He knows I’m here every day at the same time,” said 18-year-old DeSean Williams. “He knows what I’m doing, but he doesn’t make the effort to come see me. I don’t get a ‘hello,’ a text message. It’s nothing.”

That is one of the reasons why Bertrand, along with Dorion Jackson, Shaka Smith and Deuene Hickman, started Passport to Manhood.

“I’m only 26 years old and I’m the closest thing these boys have to a father figure. That frustrated me,” said Bertrand. “It’s a program that makes kids understand that getting older doesn’t make you a man. It’s taking accountability of your actions and being a person people can depend on.”

Bertrand and his friend Jackson know that becoming a man doesn’t come without bumps in the road. He knows the violence in their community. These two mentors were robbed and shot leaving a homecoming game in November.

“You guys know more than anything that this neighborhood that we live in… We can’t take the easy way out. It’s very hard to turn your back on a community that is putting food in your stomach and clothes on your back, but at the end of the day, those people aren’t going to be there when you are locked up.”

Dyel Eason is a teenager who was already locked up. He’s now out of jail and accomplishing his goals.

“After that, I didn’t want to go back to that,” said Eason. “I wanted to be better.”

So to better himself, Eason signed up for Passport to Manhood program. He is the first graduate. Now, Eason is employed by the Boys and Girls Club and he’s a college wrestler, too.

It’s why Bertrand and these role models do what they do.

“This program implements tools and resources for these kids so they can overcome conflict and overcome adversity that they see on the streets on a daily basis,” said Bertrand.

The focus is on these young men struggling at school or at home. They discuss gangs, how choices affect your life and they make goals.

Smith is the Executive Relations Manager for Quality of Life, Inc. He says he understands what these boys are going through.

“Whenever I get to work with children in my same situation, of course I make the sacrifice to come in and show them the ropes,” said Smith.

Hickman, the CEO of Quality Life Counseling Center, says being part of the program to change lives hits home for him.

“I feel like the value that anything that is done is in the pudding and not in the words. I feel as though to be able to team with Cameron and the Boys and Girls Club to do these projects is fulfilling. I like to be hands-on and engaged with what the kids are going through.”